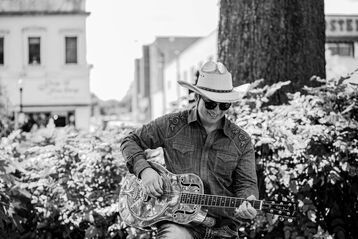 ​A city man with a country heart, Stanford Lee has a story to tell. His story is about shiny guitars, a crisp cowboy hat, and flashy western suits. It’s about neon and grit, flash and nudie suits, and down-home roots. After spending so many years playing indie rock and pop Stanford Lee made a change. Trading in black eyeliner for cowboy boots, Stanford Lee has gone country. Why? Because “country has a longing for home and hardship, and some drinking and heartache. It’s a story I can tell.” And that’s exactly what Stanford Lee is out to do.

​Inspired by the likes of country music greats such as Hank Sr., Buck Owens, and Merle Haggard, Stanford Lee is also after his own style. “I’ve found my own picking style and don’t try to sound Nashville anymore…I’m after my own thing.” So what is his thing? “I love a good hook and some rock guitar…I’d like to bring back the era of flash and nudies suits. I just love it.”

Growing up to the sounds of the Bakersfield artists and trucker music, Stanford Lee was hooked on country from the start. Though he later went on to play rock and pop starting in high school and well into his adult life, Stanford still kept his idols like Ernest Tubb and Gram Parsons close to his heart. It wasn’t until he added an upright bass to his instrument collection in 2013 that Stanford began to hear his calling.

With the addition of the upright bass to his instrument collection and a mandolin and banjo soon after, Stanford began to experiment with some “blue-grassy gypsie jazz stuff” during some jam sessions with a local fiddle and lap steel player. It was during these sessions that Stanford became aware that he had the right dream of music but the wrong genre. He says, “I made a professional demo and did some gigs but never felt settled in rock or indie stuff.” From 2013 to 2017 he began to explore other genres. He dabbled with some rockabilly when he wrote Zombies of the Road and Red Roses in a Cadillac. But by 2018 he made a decision. “I realized there was no connection for me with the music I’d been writing. (Like dark important stuff) Already having an upright bass, lap steel, and banjo, I thought I’d give it a shot.”

Soon after Trainchaser was born. Stanford was writing country exclusively by then but he had some patriotic songs he wanted to share. He shifted his writing to complement the small three-piece country band.  The project was short-lived, but it proved to be one of the most exciting projects Stanford ever worked on. Although the group was disbanded when the drummer left for Nashville, the music was still calling Stanford’s name. He remembers “between shifts I’d sit in the car and practice guitar, write songs, and work on my repertoire. “ It’s a practice he still does today. “I’m a city guy these days. Every day I go to the city it makes me more country. Landing jobs and making downtime for music is kind of a lifestyle. My time is spent between shifts practicing guitar and grinning ear to ear because of what I put back into the dream.”